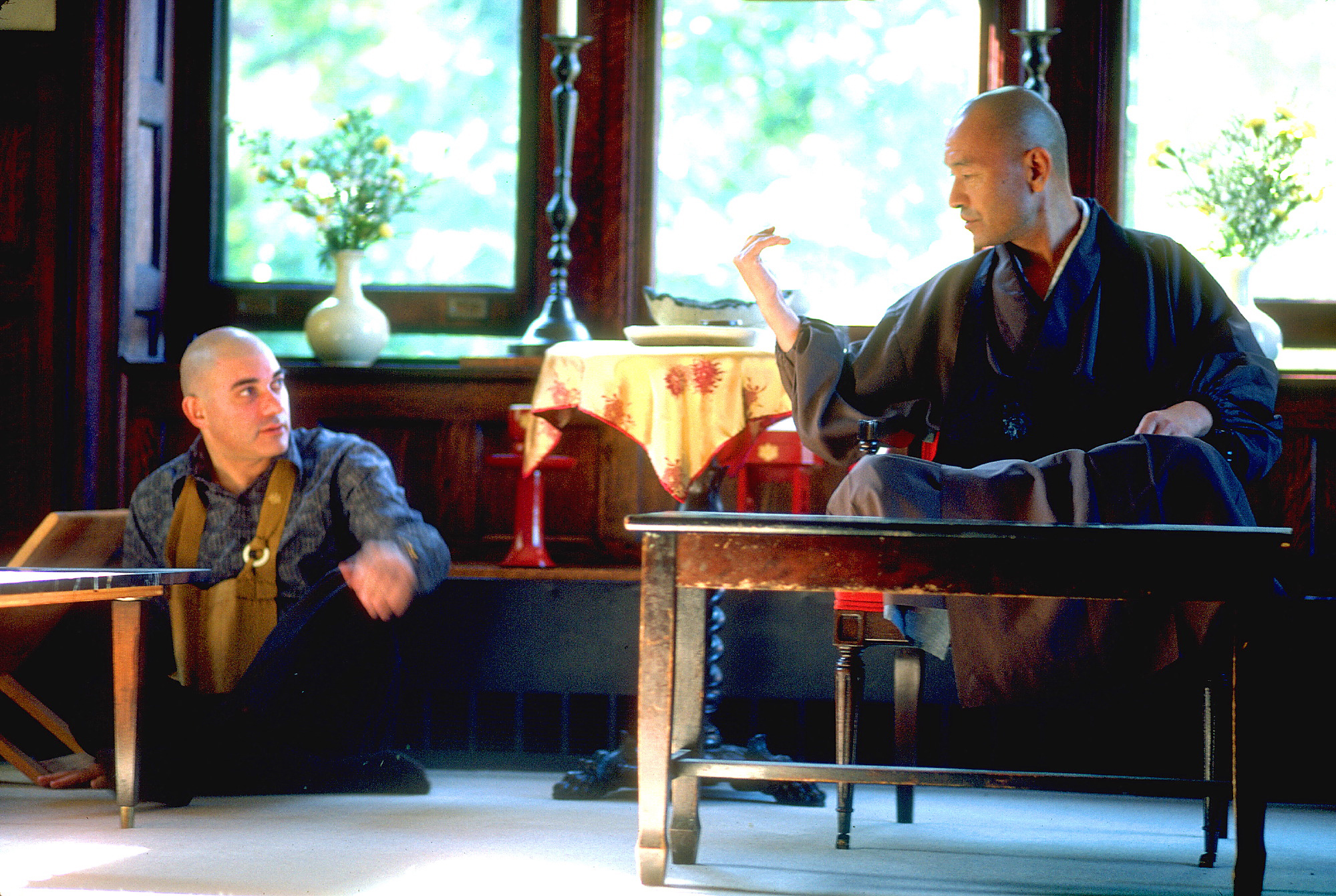 LOS ANGELES, CALIFORNIA and MONTAGUE, MASSACHUSETTS, USA. This writing, by Roshi Eve Myonen Marko, first appeared on her blog on May 2, 2019.Â  It has been reprinted here with her permission.Â  The piece opens with a transcription of a letter by Taizan Maezumi Roshi to Bernie Glassman and his former wife Helen Harkaspi, written during Bernie’s early years of Zen training.Â  The transcription is followed with a reflection by Eve.

I have just returned from meeting Yasutani Roshi. He is fine and in good health. On the contrary, Iâ€™ve caught a cold in last few days. In Japan very bad cold is spreading. I went to the doctor and got a shot. It will be okay very soon.

Thank you very much for your letter. I am very glad to realize that you are firmly enthusiastic about supporting and expanding the Center. Iâ€™ve received a few letters from Grant and John, each time they mention your help and I greatly appreciate it. My study is going along very smoothly, only the matter of time and plan, by the end of this year I may be able to finish without difficulty if I can come back early summer. Weâ€™ll talk about it when I return.

Regarding the Berkeley Group, I think it is good idea to sit together. When Koryu Roshi goes, we can take him and have one evening for zazen evening. One thing we should be careful is that since there is one group in Berkeley (SF Center), Peterâ€™s group should not be appeared to be antagonistic toward SF Center Group. Donâ€™t you think? Better avoid unnecessary frictions as much as possible. Take it easy and go steadily, slowly and yet firmly. Everything is always with oneself at any time.

Same thing would be said in looking for a land. When time comes, we can do it, accomplish it without difficulties.

Thereâ€™s nothing quite like the new green of an early New England spring. In Jerusalem, my brother told me, the green is already turning yellow; their spring barely lasts several weeks before the blasts of summer heat arrive. Not so here, where spring is green and fresh, full of optimism and glory. By August it will turn darker and heavier, laden with experience. Now, the leaves arrive full of hope and wild expectation.

And thatâ€™s how it was in those few fledgling dharma centers 50 years ago.

The past pulls on me. These 50 year-old letters pull on me. Maezumi Roshi casually mentions Koryu Roshi and Yasutani Roshi, two of the great Japanese Zen masters of the 20thÂ century. I donâ€™t have Bernieâ€™s letters to him; I donâ€™t need them. In every word I can read the sense of something important going on, the youthful joy of participating in history, the lure of the big adventure. I wasnâ€™t there in those early years of the Zen Center of Los Angeles, but I joined Greyston early enough to remember the excitement of developing socially-engaged Buddhism, the confidence and exuberance, wanting to give it your all because you think itâ€™s so important and because you love it so much.

Thatâ€™s the thing, you love the Dharma. Some of those early pioneers loved it more than they loved their families, far more than they loved their jobs and friendsâ€”most of the time they gave up their friends for their companions in the Buddhist sangha. See the excitement about looking for land in Santa Barbara for a new monasteryâ€”and thatâ€™s just a few years after the City Center was formed. But they have no doubts, they look to expand, get bigger, stretch out.

But I remember what Bernie told me once or twice about his teacher:Â People think that I was the ambitious one, the one who pushed ZCLA to buy properties on the block even when others objected, the one who went to New York and built Greyston and businesses and bought more property for an AIDS center, then founded Zen Peacemakers. But let me tell you, I had lots of quiet talks with Maezumi Roshi when there was no one else around, just him and me, and his ambitions for the dharma were far greater than mine. They would be amazed if they heard what I heard about what he wanted to come out of ZCLA.

They loved the dharma, they loved Buddhism, they loved Zen; there was nothing they wouldnâ€™t do to help it take root and flower. In fact, they were in love with it like a young couple is in love, oblivious to what the grownups said, to reminders to look around them and not take so many risks. To warnings about how life turns out. I was one of them; I was in love, too.

And in fact, life did turn out. Spring became summer became autumn like it always does, the sun rose and fell. And after enough hard years and deaths you look at that exciting past and wonder if it was all a dream, and whether it was really all that important.

Itâ€™s easy to criticize looking back. Easy to criticize how they neglected their families, ignored boundaries, dismissed constraints. They did all thatâ€”and we owe them. They didnâ€™t do this for money; nobody made millions and accumulated a fleet of Mercedes-Benzes. Many lived and continue to live simply and humbly. They basically felt that a good star brought them into an unforgettable encounter with the dharma and they had no choice but to follow that star till the end.

A verse is chanted in Zen meditation halls before a teacher gives a talk:

Is rarely encountered even in millions of ages.

Now we see it, hear it, receive and maintain it.

May we completely realize the Tathagataâ€™s true meaning.

In my training we chanted this over many years. Finally, when I began to teach, Bernie joined us one evening and heard everyone chant this same verse that he had learned from his teacher. When we finished he turned to me and said: â€śThatâ€™s wrong. Itâ€™s not true that the Dharma is rarely encountered even in millions of ages. The Dharma isÂ always encountered, but rarely perceived.â€ť

Right then and there we changed the verse, and have chanted it this way since that evening.Â The Dharma is always encountered but rarely perceived.

They perceived it. We have benefited. The only way to repay that gift is carry it forward.