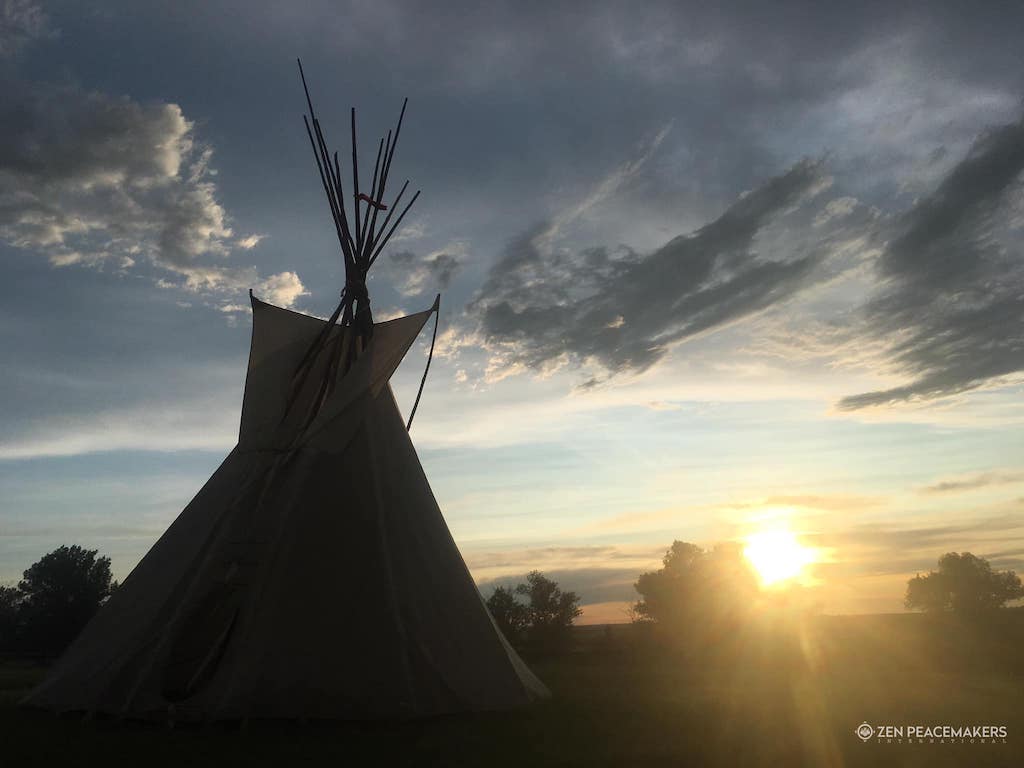 SOUTH DAKOTA, USA. The 2019 Zen Peacemakers Native American Plunge was held July 14-19. This year brought together thirty-six participants from Australia, Switzerland, Israel, France and across Turtle Island- as the United States of America is referred to by the indigenous Native Americans. It is the fourth Native American Program held by Zen Peacemakers International and the second of a four-year program bearing witness┬áto the past histories, traditions, and present-day realities of the Lakota people. The itinerary carefully planned to include sacred sites for the Lakota-speaking Native Americans. The first stop was to be at Inyan Kara (meaning ÔÇ£Stone Gatherer MountainÔÇØ), a long-time sacred place of prayer and ceremony for the Lakota, particularly for mothers giving birth. The site, previously open to visitors, is now owned privately with access ÔÇ£by permission onlyÔÇØ from property owners. ZPI was┬ánot able to secure permission and the plans for the program began to shift in the true spirit and test of Not Knowing. In its stead, the first ceremonial gathering was at Bear Lodge, also known as DevilÔÇÖs Tower. Here we gathered under pines and aspens at the foot of the butteÔÇÖs tremendous presence. As described by the hosts, this time of year in July is the time of the ancient ceremonial Sundance, practiced throughout the Black Hills over several days. Here celestial alignments allow the opening of ÔÇÿportalsÔÇÖ to Spirit at particular sacred sites to assist dancers in their prayer, transcendence, and offerings for the benefit of all beings and the healing of Mother Earth. That evening, and each evening thereafter during our plunge, under blue-gray skies, participants watched the first of the nightly storm-fronts roll in- wild and short-lived- bringing the beauty and challenges of torrents, lightning, and the loud Thunder Beings. Each night tents remained dry and a full moon graced everyoneÔÇÖs stay. The following day the participants gathered on a grassy opening in Spearfish Canyon, by a river that had carved its great walls over the millennium. Here the participants were led in games and songs by our hosts, many in the Lakota language, discussing the importance of language as ÔÇ£lifeÔÇØ to the culture. Manny and Renee have recently opened an immersion school in Eagle Butte for kindergarten and first-grade students where only Lakota language is spoken.┬á Next stop was Mato Paha (Bear Butte), rising over 1200 feet from the surrounding vast prairie landscape. Another sacred site and ÔÇ£portalÔÇØ, many Native Americans come here to pray and perform a multi-day immersive ritual and ceremony known as ÔÇÿvision quest’. Several NA Plunge participants climbed silently to its peak, offering prayers, prayer flags, and tobacco. In afternoon gatherings, Manny, Renee, Violet, and Claudia offered stories and teachings, specifically on what it means to be a ÔÇ£good relativeÔÇØ in the Lakota tradition, where ÔÇ£relativesÔÇØ are not only the next of kin but extended to ÔÇÿfamilyÔÇÖ that includes all beings ÔÇô animate and inanimate. The well-known Lakota expression, ÔÇ£Mitakuye oyasinÔÇØ meaning ÔÇ£we are all relatedÔÇØ, is a way of life and deep spiritual practice within the culture.

On the last day, we visited Eagle Butte, the largest town on the reservation and the site of the new LOWI School founded by Manny and Renee Iron Hawk. Eagle Butte is one of the poorest counties in the U.S. According to the Bureau of Indian Education in 2013, 67% of children were living in poverty — the highest rate for children in poverty in the U.S. Unemployment hovers at 70% and per capita annual income is an average of $8,175. While overall crime rates are low on the reservation, suicide rates in South Dakota, particularly among Native populations, are among the highest in the nation. Endeavors such as the LOWI School Project are not only desperately in need, but also a testament to our host’s great commitment to honor the 7th generations to come┬áwith critical focus and sensitive immersion to their language and culture.

The participants also got the opportunity to visit the Cheyenne River Youth Project, a thirty-year-old robust social enterprise offering supportive services for all ages, as well as after-school programs and an 8-acre garden. On that day of service, participants helped in cleaning the new LOWI School building, which had just been gifted for this purpose by the tribal council.┬á Participants were also assisting in the weeding and harvesting of fresh vegetables in support of the Youth Project’s Garden. As the night fell the groupÔÇÖs hosts fed all home-cooked meals and held an awesome celebration honoring their guests. The following morning, the participants prepared meals for the homeless community and gathered for the last round of prayer, sharing, and farewell. Dinner amongst the extended family in South Dakota, USA.

This summary was prepared with the help of Linda Coleman of Long Island, NYC.┬á

For a deep dive into one Plunge participant’s personal experience, we invite you to read Australian Samatha Merory’s reflection in her post Peacemaking & The Wisdom of Lakota Elders.┬á To learn more about LOWI please explore their┬áFacebook Page and website at https://lowischool.org/.┬á

┬áIf you would like to assist in supporting the LOWI School consider helping by purchasing the current items found on their Wish List.

Any & all support is welcomed with deep gratitude.┬á